Marion Crane (Leigh) bored with her job as a secretary and wanting to be with her lover (Gavin) but can’t because they can’t afford it, she impulsively takes the $40.000 she supposed to deposit for her work, so they can start a new life.

There’s a storm brewing so she leaves the main highway and travels along a back road and there she finds the Bates Motel.

There she checks in for the night and meets Norman Bates (Perkins) the owner /manager, who plays this with a subtle man/boy creepiness initially it’s hard to put your finger on what is so odd about him.

Norman is an amalgamation of himself and his domineering mother, I always felt he was in love with her, but her sneering domination of him was purely about control.

He fixes Marion a light supper and she overhears him arguing with his mother, and that the mother felt he was attracted to their new guest and wanted more, Marion suggests he put his mother in a home believing the mother to be real. 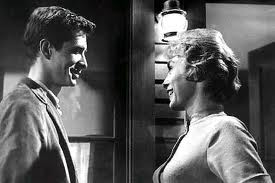 When Marion goes to her room Norman spies on her through the peephole, even then you still really have no idea what’s to come, this was a cinematic first to see the overt sexual tension but not based on the norms but something far deeper and touching on subjects that in the 1960’s weren’t even voiced publicly.

Marion steps into the shower, and so it begins the first slash of the knife, again a cinematic first as it was not just brutal, shocking but done in close up with the musical score being a perfect accompaniment to each slash of the blade, they used 77 different camera angles to capture this scene. 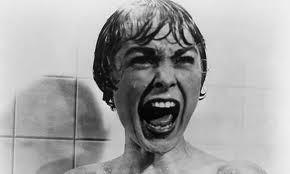 Marion never know who kills her, though Norman believes it to be his mother, so much so he runs up to the house afterwards screaming “mother mother what have you done” the entire film has a gothic feel to it with the creepy house on the hill behind the motel and that we never see the mother just hear her voice.

A great movie Hitchcock a master at suspense, and tightly directed with an attention to detail.

The ending has a terrific punchline when Norman is finally caught he is now completely immersed in his mothers persona, he’s sitting in the interview room with a fly buzzing around the single light bulb and believes that if he remains quiet they would believe that being a little old lady he’d never harm so much as a fly. 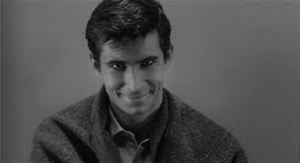 I returned to this blog in September 2014, after a 2 year absence, due to depressive illness and homelessness. This journey charts the rocky road to recovery and my feelings about it, and getting a home together after losing everything, this too has been a rocky rocky, both things connected on many levels, but separate at the same time. If you want to know more please read my blog:) and comment on any blog you like I enjoy the interaction, and belong to a great community on here. Thanks for reading.:)
View all posts by therabbitholez →
This entry was posted in Blogging, Film, Movies and tagged Alfred Hitchcock, Domination, film, Mother, Movies, Phsyco, Suspense. Bookmark the permalink.