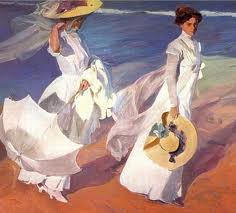 I think I must be regressing, sorry folks I have another memory to share.

The year was 1982, I was at catering college at the time and the girls and I decided on a foreign holiday, we were of to sunny Spain well Benidorm to be exact a kind of Spanish mecca for the English holidaymaker.

We all had jobs by then and saved diligently for the £130 the airfare and apartment, we also had to get passports for the first time, plus get our parents sign our holiday forms as we were under eighteen.

So the day finally dawned, we had to go to Victoria station to get the train to Gatwick, I don’t think we stopped giggling all the way, we finally checked in and had a stroll around the airport and of course none of us had ever flown before, we had to go outside to board the plane which I was very disappointed about, thinking I would just sweep onto the plane from the tunnel not trudge up the flight steps..lol. also it’s quite exciting the firstime you fly well also terrifying..lol

The airline was called Dan-Air(no longer in business) and talk about herded in like battery hens I swear the man in front was sitting in my lap for whole two-hour journey, leg room was unheard of then, they served something they called food, a kind of brown casserole HUH I’ve stepped in it a few times but never eaten it..lol and luckily I was on my bikini diet that’s all I’m saying.

The first thing that hit you was the heat, not used to this kind of weather back in Blighty, we had a further one hour drive into Benidorm, and we learned the joys of Spanish driving…lol finally we arrived at our apartment block checked in, the lift wasn’t working (of course) and we had to walk eleven flights of stairs to our apartment, but remember I was eighteen it was nothing even with my case, now I would have to be air-lifted..lol.

Being teenage girls we changed and headed for the beach wich was actually across the road, and basked in the sun for the rest of the afternoon, that night we left for dinner, dressed in our finery as you can imagine the resort catered very well for English tastes, everything with chips(fries) and English breakfast was served all day, so after our burger and chips we hit the night clubs with avengence, most were open until 3am..woo hoo, we then did the other English tradition and had a kebab.. yes even in Spain there was a kebab shop(for those across the pond don’t even ask).

We followed the same routine everyday (that’s why the saying, Mad dogs and English men go out in the midday sun) I tell you it was exhausting all that lying around eating a diet of burger and chips chicken and chips fried breakfast, thank god the sun dried out my spots..lol and of course I had my own personal swarm of mosquitos, so nice they met me at the airport and stayed with me the whole two weeks, the girls thought it was hilarious, but I got the last laugh on D she got sunburn and her face doubled in size, it didn’t stop her though she just lathered on the baby oil and did herself to a nice turn, and of course the eleven flights of stairs, as the lift only worked sometimes.

Unlike now but those days abroad the English complained, couldn’t get a decent cup of tea, nobody spoke English..lol and it was too hot.

On our last night we went clubbing and stayed out all night thinking our bus was leaving in the afternoon, WRONG… they had to wait while we hastily packed, much grumbling from the other passengers..lol anyway me made it home safely with promises to do it again next year(we did Tenerife), we bought our parents the same presents Spanish doll , and a stuffed Spanish Donkey…lol

I returned to this blog in September 2014, after a 2 year absence, due to depressive illness and homelessness. This journey charts the rocky road to recovery and my feelings about it, and getting a home together after losing everything, this too has been a rocky rocky, both things connected on many levels, but separate at the same time. If you want to know more please read my blog:) and comment on any blog you like I enjoy the interaction, and belong to a great community on here. Thanks for reading.:)
View all posts by therabbitholez →
This entry was posted in Blog, Blogging, Culture, Thoughts and tagged Beach, Bikini, Drinking, Holiday's, Planes, Spain. Bookmark the permalink.
%d bloggers like this: